Political talks stall in US on next round of coronavirus spending

Talks between United States congressional leaders and the White House on a next round of coronavirus spending stalled on Wednesday.

Treasury Secretary Steven Mnuchin suggested a short-term extension of federal unemployment benefits and a ban on evictions, but Democrats rejected the idea and blamed Republicans for failing rise to the dire moment confronting the nation.

“As of now, we’re very far apart,” Mnuchin told reporters at the White House on Wednesday. “And because of that, the president and we have discussed a short-term extension to UI [unemployment insurance] and the evictions so that we have some period to negotiate before this runs out.”

Unemployment insurance benefits of $600 a week and a federal ban on evictions passed by Congress in March and April are expiring at the end of July. Millions of Americans – as much as half the US working population – have lost their jobs because of the coronavirus.

Republicans in the US Senate and Democrats in the House of Representatives have proposed between $1 trillion and $3 trillion in new spending to keep the US economy going, but they differ sharply on how to spend the money and on best approaches to the coronavirus pandemic.

“We’re looking at a deadline, obviously, of this Friday,” Mnuchin said. “If we can’t reach an agreement by then, the president wants to look at giving us more time to negotiate this.”

“We want to work on the evictions so that people don’t get evicted. We’ll work on the payments for the people. And the rest of it, we’re so far apart, we don’t care. We really don’t care,” Trump said.

On Capitol Hill, Democratic leaders rejected the idea of a short-term extension of unemployment benefits and the renewal of the eviction ban and blamed Republicans for failing to put forward adequate proposals to meet the crisis.

“We are not accepting that,” the top Democrat in Congress, House Speaker Nancy Pelosi, said.

“We don’t know why the Republicans come around here with a skinny bill that does nothing to address what’s happening with the virus,” Pelosi told reporters at the US Capitol after meeting with Republicans.

Senate Democratic leader Chuck Schumer lamented, “This is the greatest economic crisis we’ve had in 75 years and the greatest healthcare crisis in 100 years. And our Republican friends don’t seem to come close to meeting the moment.”

Republicans are opposed to providing money Democrats want for state and local governments whose tax receipts have been slashed by the downturn in economic activity. Cities and states nationwide are struggling to manage their budgets and keep state and municipal workers employed.

“They want big bailout money for Democrats that ran cities terribly. Their cities are going down the tubes. If you look at Portland, if you look at what’s going in Seattle – Democrat-run cities – whether you like it or not, they’re terribly run, and they’re always overtaxed. So, they’ve taxed them too much and they run them poorly. And we don’t like that,” Trump said.

Pelosi said Republicans were further “unwilling” to provide substantial funding that Democrats want for public schools to meet costs of reopening with new safety protocols and social-distancing measures – and additional funding for testing and tracing nationwide. 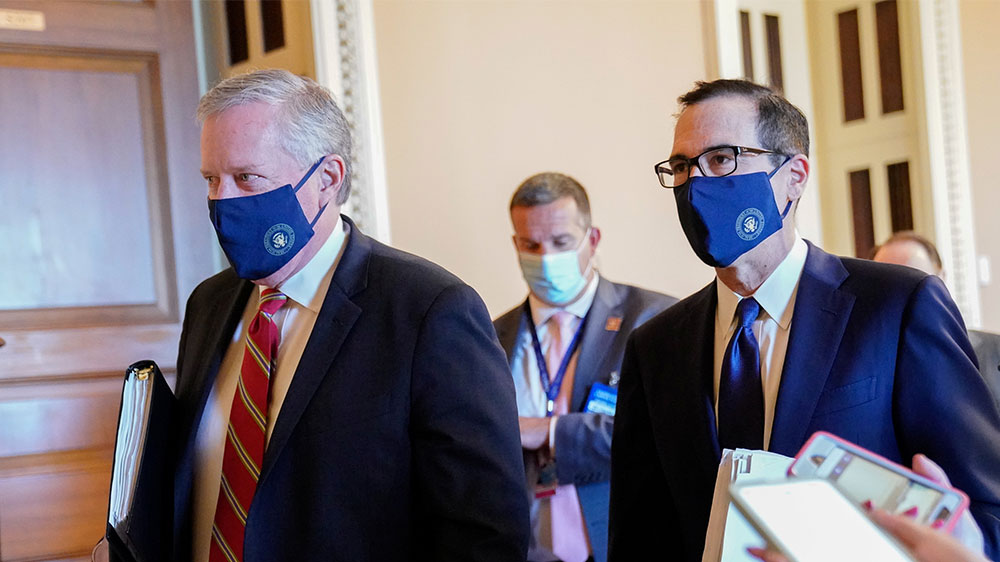 White House Chief of Staff Mark Meadows and Treasury Secretary Steve Mnuchin walk together in the US Capitol in Washington, DC as talks on coronavirus spending with Democratic leaders reached a deadlock on July 29, 2020 [Erin Scott/Reuters]

Pressure on Congress to act is likely to increase as the virus resurges and the impact of the massive US job losses begin to be felt in US cities and towns.

Federal Reserve Chairman Jerome Powell said on Wednesday that preliminary data on the activity of Americans indicates the economic recovery that began as states reopened in May and June has begun to slow with the re-emergence of the virus.

“High-frequency data is showing that the pace of the recovery looks like it has slowed since mid-June,” Powell said in a news conference in Washington.

“The path of the economy is going to depend, to a very high extent, on the course of the virus and measures we take to keep it in check,” Powell said.

Among the sticking points between Congress and the White House, Republicans in the Senate proposed funding in their bill for a new FBI headquarters in downtown Washington, near Trump’s hotel.

The FBI needs a new building to replace its aging headquarters, but critics complain it would benefit the president financially, making even some Republican senators uneasy.

“They need a new building, and we can do it very easily,” Trump said. “I would make sure you build a great building at a fraction of the cost, and they can have it done quickly.”