A group of men have forced open a door at the Chinese consulate in Houston, United States, and entered the diplomatic mission shortly after staff there vacated the premises on the orders of the US government.

The closure of China’s Houston consulate on Friday marks a sharp deterioration in relations between the world’s two biggest economies, with China retaliating by ordering the shutdown of the US mission in the southwestern city of Chengdu.

The 72-hour deadline for the Houston mission’s closure ended at 4pm local time on Friday, and Chinese officials were seen loading large sacks of objects and documents onto U-Haul trucks and tossing more into dumpster bins.

They were jeered on by a small group of protesters who carried flags expressing support for US President Donald Trump.

Shortly after the last of the Beijing diplomats departed, law enforcement cordoned off the area and men who appeared to be US officials pried open a rear door. Then, two uniformed members of the US State Department’s Bureau of Diplomatic Security arrived to guard the door, according to witnesses at the scene.

Neither the men nor the security officials answered questions from reporters.

Meanwhile, in the Chinese city of Chengdu, dozens of police officers were stationed in front of the US consulate as onlookers took photos before being prodded to move along.

A consulate emblem inside the compound was removed and staff could be seen pushing trolleys and several consulate vehicles came and went. The US consulate has until 10 am on Monday to vacate the mission, according to the editor of China’s Global Times tabloid said on Twitter.

The tit-for-tat moves come as ties between Washington and Beijing deteriorate to what experts say is their lowest level in decades. The two nations are at loggerheads over issues ranging from trade and technology to the new coronavirus pandemic, China’s territorial claims in the South China Sea and its clampdown on Hong Kong.

China warned of countermeasures and on Thursday ordered the US’s Chengdu consulate shut as a “legitimate and necessary response to the unreasonable measures” by Washington.

“The current situation in China-US relations is not what China desires to see, and the US is responsible for all this,” the foreign ministry said in a statement.

Foreign ministry spokesman Wang Wenbin later told reporters that some US staff in the Chengdu consulate, near Tibet, “were engaged in activities outside of their capacity, interfered in China’s internal affairs, and endangered China’s security and interests”.

He did not say how. 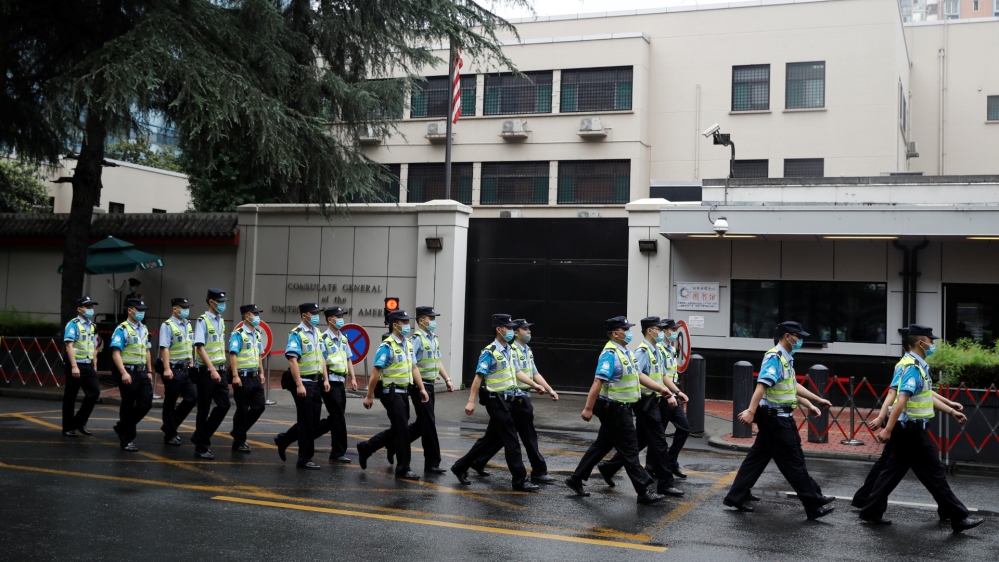 Al Jazeera’s Katrina Yu, reporting from Chengdu, said people in the city “have been quite supportive of the order to close the consulate here, saying they support Beijing taking a strong stance at what they consider unjustified moves by the US”.

“Yesterday, there was a man who came and quite cheekily set off fire crackers in front of the building in celebration. He was arrested but on Chinese social media, he was hailed as some sort of a hero.”

Amid the deepening spat, the US Department of Justice has pressed charges of visa fraud against four Chinese scientists working in the country, accusing them of hiding their ties to China’s People’s Liberation Army.

The department also said a Singaporean man had pleaded guilty to using his political consultancy in the US as a front to collect information for Chinese intelligence.

Meanwhile, in a major policy speech in California on Thursday, US Secretary of State Mike Pompeo called on “free nations” to triumph over the threat of what he said was a “new tyranny” from China.

“Today, China is increasingly authoritarian at home, and more aggressive in its hostility to freedom everywhere else,” Pompeo said.

The speech drew sharp criticism from Beijing, with Hua Chunying, spokeswoman for the Chinese foreign ministry, saying Pompeo’s remarks suggested he wants to “launch a new crusade against China in a globalized world”.

“What he is doing is as futile as an ant trying to shake a tree,” she wrote on Twitter. “It’s about time that all peace-loving people in the world stepped forward to prevent him from doing the world more harm.”