Just four days after beginning a truncated coronavirus-delayed season, Major League Baseball (MLB) ran into a serious obstacle on Monday with the postponement of two scheduled games due to a COVID-19 outbreak among Miami Marlins players.

The postponement of the games in Philadelphia and Miami was a potentially ominous development for MLB and other major professional sports leagues in the United States and Canada hoping to forge ahead during the pandemic. The National Basketball Association (NBA) and National Hockey League (NHL) are set to resume play this week after a hiatus of more than four months, while National Football League (NFL) training camps are opening.

While it was unclear whether the MLB season has been placed in jeopardy, some public health experts urged the suspension of play. MLB Commissioner Rob Manfred has not specified the conditions under which he would consider such action.

“They need to suspend games, do aggressive contact tracing, and see how bad this outbreak is,” Dr Ashish Jha, director of the Harvard Global Health Institute, wrote on Twitter. “I don’t know if MLB can resume the season. But, without aggressive action and vigilance, there is little hope we’ll see more baseball without more outbreaks.”

They need to suspend games, do aggressive contact tracing, and see how bad this outbreak is.

I don’t know if MLB can resume the season

But, without aggressive action and vigilance, there is little hope we’ll see more baseball without more outbreaks https://t.co/8mXcCyqvIQ

The US leads the world in coronavirus cases and deaths, with worrisome infection rates in numerous states including the Marlins’ home state of Florida.

According to an ESPN report, at least 13 Marlins players have tested positive in recent days.

The Marlins opened their season on Friday in Philadelphia and were scheduled to return to Florida on Sunday for their scheduled Monday home opener against the Baltimore Orioles, but put off travelling after the positive tests.

The Philadelphia Phillies were scheduled to host the New York Yankees on Monday, but that game also was postponed because the Marlins players had used the stadium.

Miami Marlins relief pitcher Stephen Tarpley pitching in the fourth inning against the Philadelphia Phillies at Citizens Bank Park in Philadelphia, the US [James Lang/USA TODAY Sports via AP Photo]

MLB said in a statement that the games were postponed while it conducts “additional COVID-19 testing”, with the Marlins self-quarantining in Philadelphia and awaiting the results.

“The health of our players and staff has been and will continue to be our primary focus as we navigate through these unchartered waters,” Marlins CEO Derek Jeter said in a statement, adding that the postponement “was the correct decision to ensure we take a collective pause and try to properly grasp the totality of this situation”.

The pandemic has roiled sports worldwide, delaying and interrupting seasons, forcing the cancellation and postponement of major events and pushing the Summer Olympics planned for Japan back a year amid questions about health risks for athletes and others. US collegiate sports also are in flux.

MLB had planned to open its 162-game regular season in March but postponed it because of the pandemic, opting for a condensed 60-game schedule that began last Thursday in Washington.

“Remember when Manfred said players health was PARAMOUNT?!” Los Angeles Dodgers pitcher David Price, who opted out of the season due to the pandemic, asked on Twitter. “Part of the reason I’m at home right now is because players health wasn’t being put first. I can see that hasn’t changed.”

The NBA has assembled its teams on a restricted campus at Disney World in Florida. The NHL has brought its teams to two sites in Canada. But most MLB teams are playing in their usual stadiums. MLB, NBA and NHL games have no fans present.

“They are kind of at the razor’s edge at this point,” Bob Dorfman, a sports marketing expert at Baker Street Advertising in San Francisco, said of MLB. “The last thing they would consider doing is cancelling the season, and I think they will exhaust every other possibility, whatever that might be. There is just too much money on the line.” 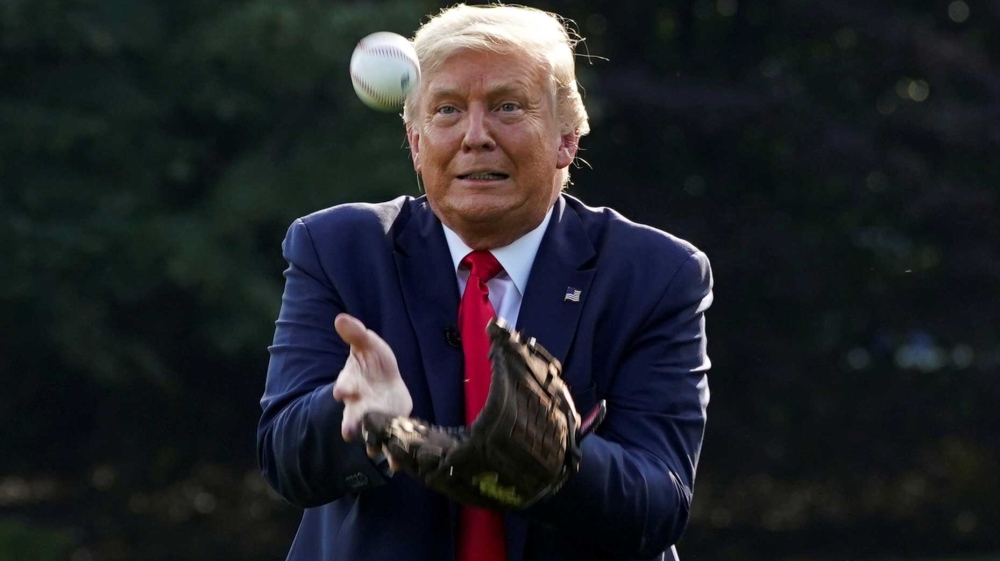 US President Donald Trump catching a ball while hosting youth baseball players at the White House on opening day for Major League Baseball on July 23, 2020, in Washington, DC, the US [Kevin Lamarque/Reuters]

The NHL is due to resume play on Saturday with an expanded 24-team playoff format in Edmonton and Toronto in Canada. The NHL said it registered no positive COVID-19 tests out of the 4,256 administered between July 18 and July 25. The NBA is scheduled to resume its season on Thursday.

With the NFL season scheduled to begin in September, Commissioner Roger Goodell said in an open letter to fans that teams must follow rigorous health and safety protocols, with “strict regulations” for isolating players who test positive.