US: Trump signs orders to force lower prices for medications

President Donald Trump on Friday signed four executive orders aimed at lowering some prices that US citizens pay for prescription drugs that may have appeal as he faces an uphill re-election battle and criticism over his handling of the coronavirus pandemic.

At a White House ceremony, Trump laid out his plan to sign four executive orders regarding drug prices. One is about importation. The others would direct drugmaker rebates straight to patients and provide insulin and EpiPens at steep discounts to low-income people.

The fourth, which might not need to be implemented if negotiations with drug companies are successful, would require Medicare to buy drugs at the same price that other countries pay, Trump said.

Democrats are eager to draw a contrast between Trump’s orders and their sweeping plans to authorise Medicare to negotiate prices with pharmaceutical companies, an idea the president had backed as a candidate.

Consumers may not notice many immediate changes from the new orders, which must be carried out by the federal bureaucracy and could face court challenges.

Trump came into office complaining that pharmaceutical companies were “getting away with murder” and promising to bring them under control. Nearly four years later, things are much the same despite some recent moderation in price increases.

A drive to pass significant legislation this year stalled in Congress. Although Trump told Republican senators that lowering prescription prices is “something you have to do”, many remain reluctant to use federal authority to force drugmakers to charge less.

Meanwhile, congressional Democrats are calculating that the election will strengthen their hand, and they will finally be able to enact a law that authorises Medicare to negotiate prices directly.

Neither side in Congress has had an incentive to deal, and the White House has been unable to enact Trump’s will.

Last year, the House passed Pelosi’s Medicare negotiations bill, which would have capped out-of-pocket drug costs for older people and expanded programme benefits, as well. It had no path forward in the Senate, and the White House called it “unworkable”.

But there was an alternative. A bipartisan Senate bill backed by Trump stopped short of giving Medicare bargaining power, but would have limited annual price increases and capped costs for older people. The bill passed out of a Senate committee, but was never brought to the full body.

“It’s not clear why the administration hasn’t made a bigger push to line up votes to get a bill through the Senate and a deal with Congress, given strong public support to lower drug costs,” Tricia Neuman, a Medicare expert with the nonpartisan Kaiser Family Foundation, told The Associated Press news agency.

White House press secretary Kayleigh McEnany said in a statement that the executive orders “follow a long list of decisive actions taken by President Trump to reduce the costs of prescription drugs and further deliver on his promise to ensure every American has access to better healthcare at a lower cost”.

US citizens remain worried about drug costs, with nearly nine in 10 saying in a recent Gallup-West Health poll that they are concerned the pharmaceutical industry will take advantage of the coronavirus pandemic to raise prices.

Another Gallup-West Health survey early in the year found 65 percent saying the Trump administration had made little or no progress limiting increases in prescription drug costs.

The pharmaceutical industry is adamantly opposed to government efforts to curb prices, and pushed back strongly against earlier versions of the proposals in Trump’s new orders.

Broadcast ads from groups aligned with the industry are already airing advertisements opposing the measures, dubbing the plan to use international prices for certain Medicare drugs as “socialist,” without mentioning Trump by name.

Trump currently trails Democratic challenger Joe Biden by roughly nine points, according to the Real Clear Politics average of all polls on the general election.

Observers note that Trump’s handling of the coronavirus pandemic may have cost him support among many demographics including the elderly, who vote in large numbers but are the most likely to die from COVID-19, the illness caused by the virus.

The Trump administration has been criticised for its lax approach to the pandemic. Trump has supported calls to reopen states so their economies can rebound. 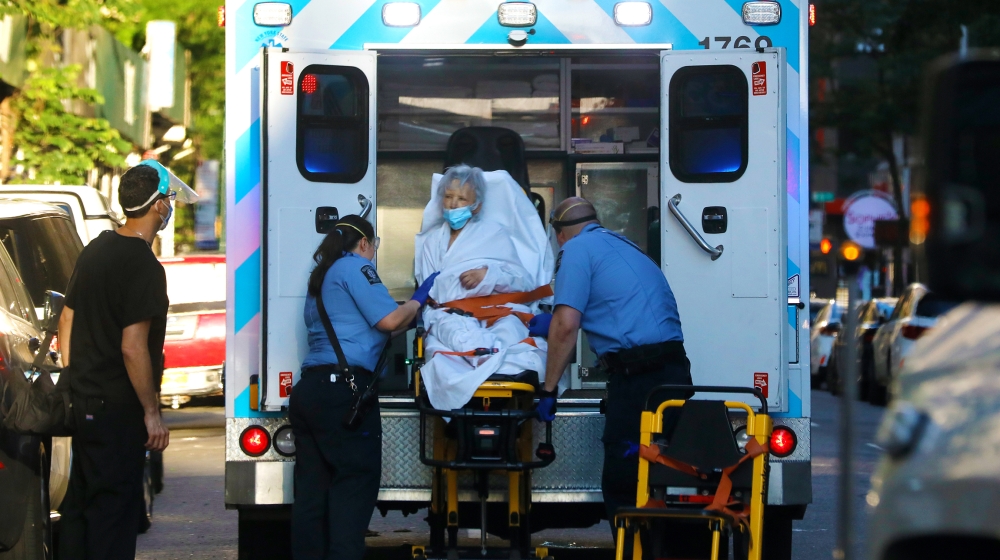 An elderly woman is transported into an ambulance on Manhattan’s west side in New York, New York [Peter Foley/EFE-EPA]

Drug prices are a particularly important issue for older people, who rely on medications to manage the onslaught of medical problems associated with advancing age.

Trump said during the ceremony that Americans are his “most important” concern.

The US currently leads the globe with more than four million confirmed coronavirus cases and 145,000 deaths, according to the Johns Hopkins University tally.