US will not expel migrant children detained in Texas hotel

The administration of US President Donald Trump has agreed not to expel a group of immigrant children it detained in a Texas hotel under an emergency declaration citing the coronavirus and will instead allow them to seek to remain in the US, the administration said Monday.

The move comes days after The Associated Press first reported on the US government’s secretive practice of detaining unaccompanied children in hotels before rapidly deporting them during the coronavirus pandemic. Government data obtained by AP showed the US had detained children nearly 200 times over two months in three Hampton Inn & Suites hotels in Arizona and two Texas border cities.

But the Trump administration has not said it will stop using hotels to detain children. The legal groups that sued Friday night said they still plan to fight the larger practice in court.

Their agreement only covers 17 children known to have been detained as of Thursday at the Hampton Inn in McAllen, Texas. After the hotel’s owner said Friday it would end reservations of rooms used for child detention, US Immigration and Customs Enforcement (ICE) removed the children from the hotel but refused to say where it had taken them.

Now, immigration authorities will transfer the children to shelters operated by the US Department of Health and Human Services (HHS), where they will have access to lawyers and should eventually be placed with family sponsors as they pursue asylum cases or other immigration relief to try to remain in the country. The legal groups withdrew their request Sunday for a temporary restraining order.

While there are shelters for migrant children on the outskirts of El Paso, Texas in the United States, officials detained children nearly 200 times at hotels [File: Jose Luis Gonzalez/Reuters]

“The children in this hotel averted disaster only because we happened to hear about them before they were deported, yet hundreds if not thousands of other children are being sent back to harm in secret,” said Lee Gelernt, a lawyer for the American Civil Liberties Union. “The government must stop expelling children in secret without giving them asylum hearings.”

Federal anti-trafficking laws and a two-decade-old court settlement that governs the treatment of migrant children normally require that most children be sent to shelters operated by HHS. The shelters are licensed by the states where they are located and generally have bedrooms, recreation areas and schooling.

Instead, more than 2,000 children have been expelled since March, when the US Centers for Disease Control and Prevention issued a declaration allowing immigration agencies to effectively shut down the asylum process out of concern about the spread of COVID-19.

The AP found that contractors paid by ICE have held children as young as one year old in Hampton Inns. ICE called the contractors from MVM Inc “transportation specialists” and refused to confirm whether they had passed FBI background checks or had backgrounds in childcare. Instead, it said the contractors were “non-law enforcement staff members trained to work with minors and to ensure that all aspects of the transport or stay are compliant” with the court settlement known as the Flores agreement. 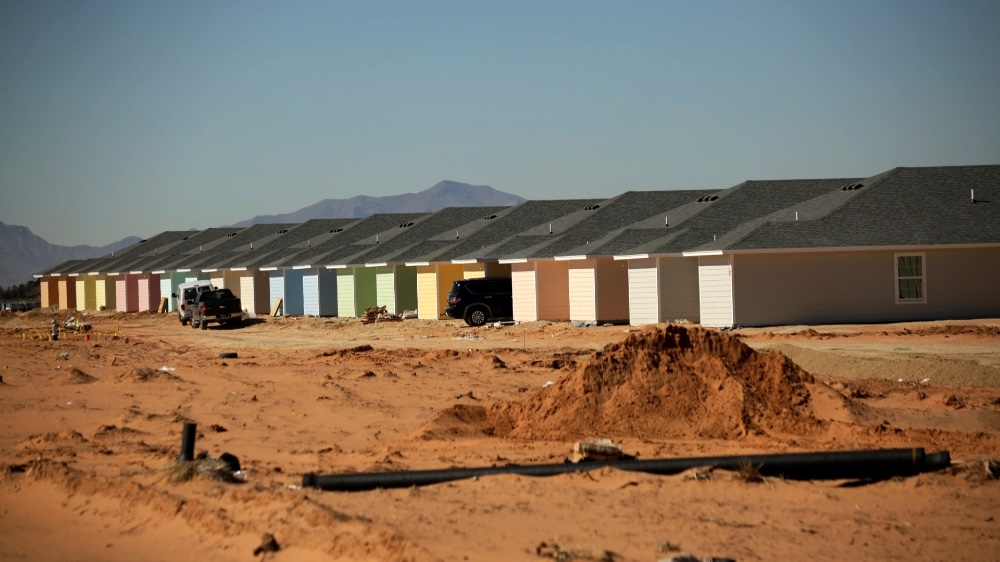 On the outskirts of El Paso, Texas, buildings under construction are to be used as shelters for migrant children [File: Jose Luis Gonzalez/Reuters]

An advocate with the Texas Civil Rights Project who walked through the Hampton Inn in McAllen on July 17 saw people in scrubs going room to room on the fourth and fifth floors of the hotel caring for children. The advocate, Roberto Lopez, said he saw one small child holding onto a gate in a doorway as an adult on the other side played with him.

On Thursday, video posted by the project showed one of its lawyers trying to enter the fourth floor to find children. The video shows three men in plainclothes confronting him, then shoving him back and slamming him into an elevator wall.

The records indicate the children were not accompanied by a parent but do not say more about the circumstances of their crossing the border. In the past, some very young children have been brought by older siblings or other relatives. Others have been sent by parents waiting for their court dates in refugee camps on the US-Mexico border with hopes they will be placed with relatives.

A spokeswoman for Hilton, which owns the Hampton Inn brand, said franchisees owned all three Hampton Inns and the others in Phoenix and El Paso, Texas, would also stop child detention in its hotels. Hilton said in a statement that the company expected all of its franchisees “to reject business that would use a hotel in this way”.

Andrea Ordin, a monitor appointed by the federal judge who oversees the Flores agreement, called on the US government last week to stop detaining children in hotels, citing the lack of oversight and standards and the threat that children could suffer emotional and physical harm.

The Trump administration responded by questioning Ordin’s authority to issue the report. Ordin’s report was “wholly outside the scope” of her responsibility, wrote Sarah Fabian, a US government lawyer who was previously criticised for suggesting in court that the government may not have to provide children in US Border Patrol custody with toothbrushes.

Judge Dolly Gee, who oversees the Flores settlement, wrote Saturday that hotel detention does fall under the scope of Ordin’s duties.